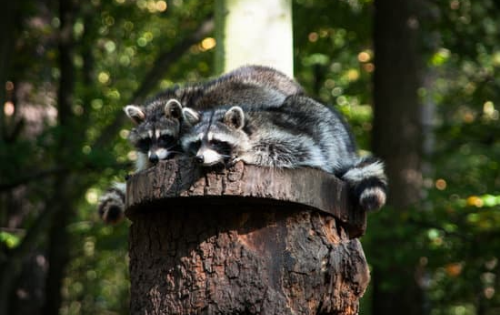 Raccoons are nocturnal animals that are commonly found in wooded areas. However, as development encroaches on their natural habitats, raccoons are increasingly finding themselves living in close proximity to humans. While they may seem cute and harmless, raccoons can actually cause significant damage to your home and property. In addition, raccoons are known to carry diseases that can be harmful to humans, such as rabies. If you have a raccoon problem, it’s important to take action quickly to mitigate the damage and protect your family’s health.

How Do I Know if I Have a Raccoon Problem?

There are several signs that indicate you may have a raccoon problem on your hands. First and foremost, if you see a raccoon on your property, it’s a good indication that there is a nest nearby. Raccoons are also known to rummage through garbage cans in search of food. If you’ve noticed that your trash has been knocked over or scattered about, it’s likely due to a raccoon issue. Finally, raccoons often leave behind telling signs of their presence, such as droppings or Tracks in the mud or snow.

What Kind of Damage Can Raccoons Cause?

Raccoons are strong animals with sharp claws that can cause significant damage to your home. If left unchecked, raccoons can tear shingles off your roof in order to gain access to your attic where they will build their nest. In addition to causing physical damage to your property, raccoons can also contaminate your attic with their droppings which may contain harmful bacteria or parasites. Finally, because they are wild animals, raccoons pose a serious threat to the health of you and your family. Raccoons are known carriers of rabies and other diseases that can be passed on to humans through contact with their saliva or feces.

Ways to Get Rid of Raccoons?

If you think you may have a raccoon problem, the best course of action is to contact a professional wildlife control company like Critter Control. Our experienced technicians will be able to quickly assess the situation and put together a plan to safely and effectively remove the raccoons from your property. We will also take steps to prevent future infestations by repairing any damage the animals have caused and sealing off any entry points they may have used to get into your home. Call pest control today for a free consultation!

The common raccoon is the type of raccoon that most people are familiar with. These animals are native to North America and can be found in a variety of habitats, including forests, swamps, and urban areas. Common raccoons are relatively large animals; they can grow to be up to 3 feet long and weigh up to 30 pounds. These animals are easily recognizable thanks to their black mask and bushy tail.

The ring-tailed raccoon is a close relative of the common raccoon. These animals are also native to North America and can be found in a variety of habitats, including forests, deserts, and mountainous regions. Ring-tailed raccoons are slightly smaller than their common cousins; they typically only grow to be about 2 feet long and weigh less than 20 pounds. As their name suggests, these animals have a ringed tail that is similar in appearance to that of a fox.

The cacomistle is another close relative of the common raccoon. These animals are native to Central and South America and can be found in a variety of habitats, including rainforests and mountains. Cacomistles are small animals; they typically only grow to be about 1 foot long and weigh less than 10 pounds. These animals are easily recognizable thanks to their long, bushy tails.

Don’t let raccoons take over your property! If you think you have a problem with these pesky creatures, call pest control services right away. Experienced technicians will be able locate the source of the problem and put together a plan to safely remove the animals from your property while also repairing any damage they’ve caused.